There is so much great music out there and just not enough time to listen to it all.  From time to time I will make a list here with some of the things I am listening to and some things that are on a “wish-list”.

This album, nominated for the Roger Bobo Award for best recording 2016 is a real jewel. The music of Telmo Marques (also pianist on this recording) fuses jazz harmonies with a relentless groove and is topped off with Sergio Carolino’s blinding virtuosity.  Favorite track(s): Sonata for Tuba & Piano “Yatta – Yarimasita” (2012) and Prologue & Prelude in g minor (2006) by Bernardo Sassetti.
https://itunes.apple.com/us/album/xl-portuguese-music-for-tuba/id1075789798

Brass Too   Brass of the Concertgebouw Orchestra

After the success of their first release, Brass Too is a great follow up CD showcasing the immense talents of this brass section. New arrangements by Steven Verhelst are placed beside the iron repertoire of Tomasi’s Fanfare Liturgique.  A fantastic listen! (Even better LIVE!!)  Favorite track(s): Maria de Buenos Aires Suite (arr. Verhelst). http://rcobrass.com/cds/2014-brass-too/

What can you say about the German Brass that hasn’t already been said?  These guys just seem to keep getting better and better (also producing longer tours in Europe).  This CD Celebrating the music of Wagner is just outstanding.  This is the type of music that translates so well to the brass ensemble and the GB just perform it with class.  It reminds me very much of the Bach 2000 album of some years ago.  Solid arrangements by Matthias Hofs.  Favorite track(s):  The Ride of the Walküre, Verwandlungsmusik from Parsifal.
http://www.german-brass.de

The Antiphonal Music of Gabrieli

Recorded in 1968 in Town Hall, Philadelphia, PA.  The Philadelphia, Cleveland, and Chicago Brass sections teamed up to play together an album (since remastered for CD) which has, and certainly will, remained one of the landmarks of brass playing in the 20th Century.  All star players from each section create a blend of sound that has influenced brass players around the world to perform in brass ensembles.  Favorite track(s):  This is difficult since they are all so very impressive!  Check out  the Canzon per Sonare no.2, and the Sonata octavi toni 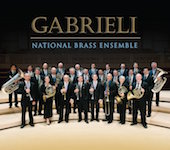 Want a list of “who’s who” in American Orchestra Brass… look no further than this CD.  It presents the music of Gabrieli in a fresh new way with some exceptional talents.  It is an amazingly clean recording and the level of proficiency is stellar.  Listen to it all back to back with the 1968 Philadelphia, Cleveland, and Chicago Brass sections and make your own decisions.  Favorite track(s): Sonata pien e forte a 8, Canzon per sonare duodecimi toni a 10.

It was a hard thing to believe that Prince died this past year.  I saw him several times and was never disappointed…actually he was amazing!  His music was constantly evolving into directions that no other artist ever dared to try. Maybe this is why many people could never “get into” him… he was just difficult to grasp.  One of my favorite albums was Musicology where Prince shows us a funk, soul, and pop in a very intimate way.  The title track is funky as hell and also shows off his humor, On the Couch (with that background Hammond Organ) just begs the listener to sing along, and the bass pounding Life of the Party just captures a little of what it was like to see him live.  A real shame he is gone.
https://www.amazon.com/Musicology-Prince/dp/B0001XTRCI

Arnold Jacobs and his legacy